I took a walk Sunday from the twisted woods of northern Europe in the 17th century to the detailed Venetian canals in the 18th century. I traveled through the romantic French countryside in the 19th century and ended my trip in the 20th century, gazing at wistful waterlilies and noticing the colors either spreading warm or rolling in cold across a landscape, changing with the rising and setting sun.

In a small but powerful exhibition, “Verso Monet – Il Paesaggio dal Seicento al Novecento” (Toward Monet: Landscape from the 17th – 20th Centuries), I immersed myself in nature. The exhibition, set up as a journey, started in the 17th century with the beginnings of landscape as an art theme rather than simply a background. The section titled “the true and the false of nature” indicates the change of attention from imagined landscapes painted in a studio, to scenes viewed and painted on site, starting with Dutch artists Van Ruisdael, Van Goyen e Hobbema. In tiny black and brown ink sketches I saw the trees, brooks and far-off cities of Lorrain and Rembrandt, Koninck and Van Ruisdael.

The Three Trees, 1643 by Rembrandt Etching with drypoint and engraving Painter, printmaker and etcher, landscapes were a primary subject of Rembrandt’s that often focused on natural drama such as fallen trees or threatening clouds. (via)

With a step I transitioned from the rolling skies and knotty trees of northern European countrysides to the busy via vai – coming and goings – of the canals of Venice. The eighteenth century introduced the age of the veduta (view or landscape) with Bellotto, Guardi and the Venetian Canaletto representing this striking leap.

Bacino di San Marco, Venice (1725–26) by Canaletto Giovanni Antonio Canal, known as Canaletto, did most of his work “in nature,” differing from the more common practice of working solely in studio. His grand scenes of the canals and piazza’s of Venice are known for their detail and accuracy, and are widely noted as anticipating Impressionism

The strong focus on nature brought me effortlessly to each location. With the details of the 17th and 18th century and the vibrant, emotive colors of the 19th and 20th it wasn’t difficult to be transported to the top of bridges overlooking the canals of Venice or under olive trees in fields of tall, wild grass.

A friend told me that he believes the purpose of art is to transmit emotions. I agree, but I believe it is also intended to transport us to another state. Whether it’s a film, music, a good book or a dimly-lit painting, the power of art is just that – to evoke emotions, to transport us in mind or spirit.

Standing firmly in Italy in both mind and spirit, I was surprised to turn the corner and find myself in America, viewing the Rocky Mountains and Lake Tahoe. 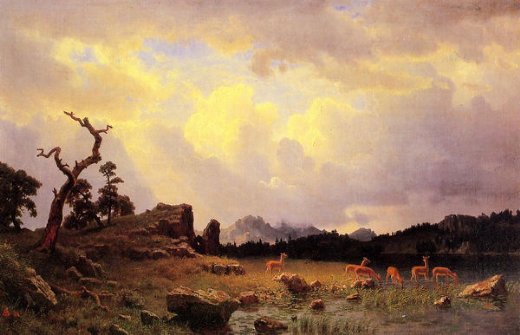 A Thunderstorm in the Rocky Mountains, 1859, by Albert Bierstadt Oil on Canvas (via)

I had entered fully into 19th century romanticism with Friedrich straining for the intimate and Turner and Constable repeating the every day. This was followed in the exhibit as in history by the realist approach to landscapes with American artists from the Hudson River School in America. Church, Bierstadt, Kensett and Heade brought me back to my own country with a stark contrast between the never-ending American space and the more confined idea of European space in nature. Until finally we entered the era of impressionism and post-impressionism as we know it today.

Starting in 1860’s with the influence of Corot and Courbet and their work in the Forest of Fontainebleau the description of landscape became the ground and theater of impressionist artists.

I passed landscapes captured by the brush strokes and bright colors of Renoir, of Sisley, Pissarro, Caillebotte, of Degas and Manet. There was Gauguin and Cézanne and nearly an entire wall dedicated to Van Gogh, one of my favorites. 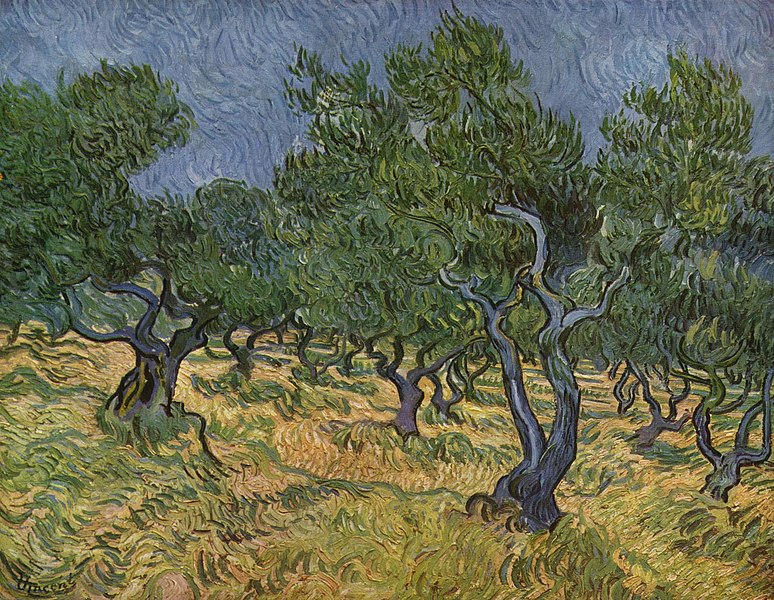 Olive Orchard, mid-June 1889, by Van Gogh
Van Gogh, one of my favorite artists because of the emotion I find in his paintings, found relief in nature. He painted at least 18 paintings of olive trees, most in different light and different times of the year.

I wasn’t familiar with all of the artists before the exhibit but I feel I can confidently say that I’m closer to each thanks to our time spent “traveling together” through the scenery of their lives.

Once the artists physically went outside to paint their landscapes, their paintings were opened to an entire new world of light, texture and color. Though it might seem that Van Gogh’s various different olive trees, or Monet’s water lilies are simply dozens of the “same” scene, actually each is completely unique – each a separate entity.

Not only does it remind me that even the greats “practiced,” it also reminds me that it takes many different perspectives to truly understand what we see – in art and in travel. Travel at different times of the day, the year, or our lives and a place will speak to us in different ways.

The exhibit ended as it was advertised, with Monet. Building up slowly slowly as I passed from room to room, from century to century until the 19th century delivered an explosion of Monet, declared as the “arrival of a great artistic journey.” Finding colors and life in a church’s facade, a beach in the French Riviera or the numerous water lilies he so often painted, finally our journey ended with nature as a real, autonomous pictorial subject.

Weeping Willow, 1918, by Claude Monet Oil on canvas. On loan in Verona from the Columbus Museum of Art! How about that!

If You Want To Go:

The exhibit will be in Verona, in the Palazzo della Gran Guardia (in the center of Verona) from October 26th – February 9, 2014.

Tickets cost € 12,00 with some discounts for students, children or elderly. Guided tours and audio tours are available in both Italian and English.

Click here for more information on directions, prices and hours.

And for those of you who can’t make it read more about the exhibit here or try the free virtual tour!

I love your blog ginamarie. You take me on journey’s I know I will never see in person. Thank you! Much Love, Aunt Gina

Yeah Aunt Gina – are you trying to say you’ll never come visit me?! haha miss you both!

[…] explored Milan, went to a conference in Perugia, an art exhibit in Verona and Carnevale in Venezia. Marco and I cooked Easter lunch and met friends and hosted […]

[…] More about Verona: Partying in the Verona Arena Photo Essay in the City of Love A Walk Through Art in Verona […]