In January my friend and I were able to convince our apprehensive husbands to go on a trip to Istanbul, Turkey in March. It’s been years since I’ve wanted to go and Marco knew that. It seemed with cheap flights and a long weekend available for everyone, now was the perfect time.

SO excited to go to Istanbul!

Then on January 12, the day after we booked our flights, a bomb in the popular, crowded, touristy Sultanahmet district injured 14 and killed 11, all of whom were foreigners. The day after we booked our flights. Obviously, that is where our hotel was also. The boys were up in arms, but my friend and I tried to brush it under the rug. Clearly Turkey is dealing with some things, but it was just bad luck that it happened when it did. We’ll be fine, we’ll all be fine.

Then approximately 29 people were killed in Ankara in February with more than 50 injured. “It’s ok,” I told my worried family members, “Ankara is far. It’s like us living in Ohio and there being a bombing in New York City.” The argument was more difficult to sustain following a second attack in the capital city in March, with 37 people dead and another 127 people injured.

For the first time in my life I had to admit, I was scared to travel. I was scared to go to Istanbul. Not scared out of my pants, canceling my flight scared. But nervous. Not nervous because I’m so excited and I hope everything goes well, nervous like “I don’t know how to evaluate the situation.”

So I did the best I could. I vigilantly followed the news, trying to decipher it objectively, and not in a hysteria as news is so often printed. I asked friends and read wishy washy articles like this one in The Guardian conveniently titled, “Is is safe to go on holiday to Turkey?” Cruise liners and travel companies were pulling their trips to the country, but I’m not a cruise traveler, I’m a real traveler damnit, and I shouldn’t be afraid! I looked up the United States State Department Travel Warning. It said:

The U.S. Department of State warns U.S. citizens of increased threats from terrorist groups throughout Turkey and to avoid travel to southeastern Turkey.

We calculated the probability. “I’m 99.9% sure that nothing will happen to us while we’re there,” Marco said, “but still.” 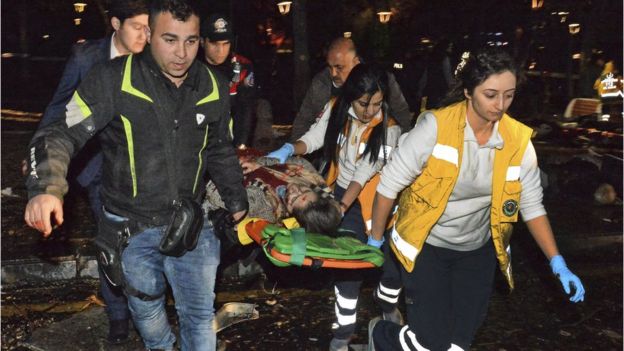 Then there was another suicide bombing in the center of Istanbul on March 19. Four people died and 36 people were injured. With it a new message arrived in our group travel chat, “Are we sure we want to do this?”

After the recent terrorist attacks in Paris, Brussels and Turkey (places I mention because they are nearer to me, not because I’m ignoring those further abroad as righteous Facebook friends suggest) the media has spewed articles about continuing to travel that have made me feel even more ashamed about my fear.

After the Paris terrorist attacks, my favorite podcaster Rick Steves wrote: “I’m sure that many Americans will cancel their trips to Paris (a city of 2 million people) or the rest of Europe (a continent of 500 million people), because of an event that killed about 150. As a result, ironically, they’ll be staying home in a country of 320 million people that loses over 30,000 people a year (close to 100 people a day) to gun violence.”

He makes a good point, but Paris is Paris. I’d still go there. It was a random and completely unexpected event in a city like Paris. We can’t say the same of Istanbul in light of recent of events

Steves continues, referencing even Turkey, and says, “I wouldn’t begin to let it keep me home because I know that statistically when security goes up, things get safer afterwards, and I know statistically, there’s more than terrorists that can cause harm. … As a writer, I try to be a little bit of an annoyance and remind people it’s no worse to be killed by a Muslim than to be killed by a Christian, so why are you acting like this?”

He’s absolutely right. Even so, I don’t want to be killed by ANYONE.

They say to know the risks. They say an event is unlikely. Probably, you’ll be fine. Well, screw that. I’m not going on holiday to probably be fine. I want to enjoy myself! This wasn’t a trip where we chose these risks ahead of time – at least not at this level. This isn’t the normal problems of travel in poor countries that us tourists and travelers are used to: robbings, harrassment or just good old fashioned ripping us off. These are terrorist bombs. This is an entirely different level of danger. That is, one we’re not used to.

In the anxious day and a half we had to make our final decision with some hope of receiving a part of our deposits I found out a friend was going to Istanbul that exact same weekend as me. Life goes on, travel goes on, and clearly others didn’t struggle with the decision as we did.

“Dangerous” is relative; it changes person to person and period to period. Some might say traveling to Indonesia is dangerous, but I didn’t give it a second thought. Others might say Istanbul is fine, and overall I’d agree, but for this trip I wasn’t prepared to risk it. In the end, our nice weekend away would have been tense, nerve-wracking. The friends we’re going with have a three year old girl. Conversations between us went as far (and absurd) as, “If it was  just us four then we could run if there were problems, but we can’t with a three year old in a stroller.”

“Run if there were problems”!? No.

All the articles say to go anyway, to not let terror win. Turkey is only moderately dangerous, they seem to say, you only have a moderate chance of getting blown up. Usually I’m down to “just go.” This time, however, I couldn’t help but feel like it was easy for the media and travel companies to blab on, they don’t have a trip in one week to the center of Istanbul.
After five bombings in as many months it all came down to: Why risk it? Though I’m still insecure about my decision, I also don’t need to feel guilty for it. Steves said that travel is a way for Americans to deal with their fears of the outside world and outside cultures, but I travel enough to know that I’m open. I’m not afraid of the Turks, or even Muslims, I’m afraid of a risk I’m not prepared to handle. I’m afraid of putting a child in danger. I’m afraid of simply not enjoying my holiday.

Terror hasn’t won – it hasn’t spread hate in my heart for another race, religion or nationality. One day I’ll go to Istanbul and beyond. For now, I’ll go to Trieste instead.

Read about our trip to Friuli Venezia Giulia:
Trieste holds a huge bit of Italy’s unknown history
Just a 9-pointed-star-shaped town, no big deal
We also ate a lot of delicious regional food

It’s always better to look back and laugh

I wish I could give you this book in person, but try to find it … called “A House in the Sky” by Amanda Lindhout. She was/is a Canadian journalist who thought much the same way as you. She was kidnapped in Somalia (15 months captive). It is her story, about her travels and her ordeal. I think you will enjoy it.

Glad you canceled the trip! xo

[…] to read more about Istanbul and Turkey in general, before our planned trip there. Unfortunately the trip was canceled, but the nuanced messages in the book remained. […]